Back during Halloween season, Burger King in America offered a "black burger" which had previously been test marketed in Japan, but America's version had white seeds on the bun and the cheese was normal instead of dyed black. Although it is strange that America would get the less gross version of a food item, I went to try it anyway. This time I didn't have my friends who normally accompany me to fast-food restaurants, so this one is pure solo. 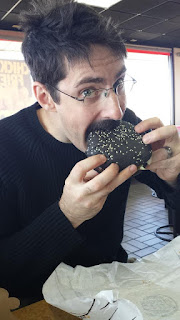 The burger was... fine, unremarkable. It tasted exactly like the last burger I remember having at Burger King, lo many moons ago. The only difference with this one is that I did, in fact, experience the widely reported next-day symptoms. How good is an unremarkable Burger King burger? In my opinion, not very good. They are good enough to eat if you are hungry, or if you are going out of your way to participate in a special promotion, but they are below average even for fast-food burgers.
Posted by Nicholas Keene at 3:50 PM