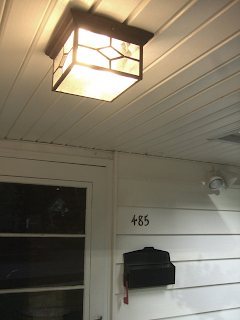 This porch light completes the plan to replace all the light fixtures on the first floor. This is actually the last of eleven first-floor fixtures, not of ten. This new light is very similar to the previous porch light, except it is newer and cleaner, taller (deeper), and has two bulbs instead of one. Because I also increased the size of the bulbs, there is now at least triple the light output as before, which is nice for a porch light.

In addition to these eleven new fixtures on the first floor, we also had many lights upgraded by an electrician when we first moved in. The electrician replaced one outdoor motion-detection light in the front of the house and two in the back; the light (which was officially defective in the house inspection) in the basement stairs; two ceiling fixtures in the main basement area; installed a trio of hanging lights over the bar; and replaced the overhead light in the workshop. The basement also received three new light switches, whereas previous owners apparently stumbled through the dark for fifty years, grasping for hanging strings to turn on lights.
Posted by Nicholas Keene at 11:49 AM