The poured-concrete slab walkway in front of my house had settled into a slope toward the basement-wall side of the foundation of my house. When it rained hard, water would overflow the gutters and fall onto the concrete, then run toward my house. The level of the dirt in the plant area between the concrete and the house was about three inches lower than the slab, meaning there was a 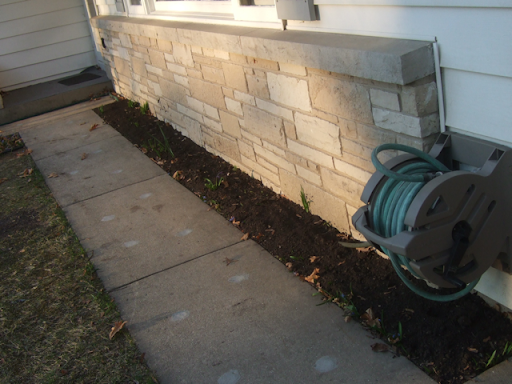 permanent, perfect water trap which held half a roof's worth of rainfall directly against the foundation of the house, every time it rained, for probably many years. Despite that brutal assault, only a trickle of water seeped into my basement, and only during heavy rain. For me, however, any water in the basement is cause for action.

We hired Concrete Raising Corp of America to mudjack the slabs of the walkway as well as the slabs of the adjacent driveway. They came out and performed the task on a day while I was at work. They used nothing but my water hose hookup and cleaned up after themselves, leaving behind slabs all evenly aligned and tilted just slightly away from the house. The slabs now have pock marks, scars of their operation.

CRC warned us that for full effect we had to fill in the dirt area, which my wife and I did this spring with simple low-cost topsoil -- about seven bags of it.
Posted by Anonymous at 8:03 PM