In our kitchen, the end of the counter to the left of the sink ends with a conspicuous open space where, presumably, the designer expected a small table for a family to eat in the kitchen. The open space is situated in front of a window which gathers morning light. My household, however, is very 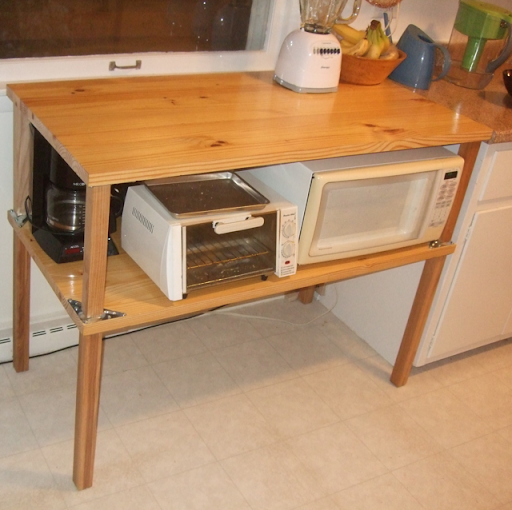 happy indeed with the dining table I made last summer (despite its shortcomings), and that table is the exclusive location for table-centric dining, be it breakfast, lunch, or dinner.

Thus the empty space in our kitchen was awkwardly useless, normally holding our trash bins and perhaps some junk. It was a generally null and useless space, crying out for, most logically, a bit more countertop. Having worked my way this far down the list of needed home improvements, I set out to fill the void. I wanted:
The small appliances I wanted to store on the lower shelf were all no taller than twelve inches; the microwave was a bit under twelve inches; so I decided the inner shelf height should be a bit more than thirteen inches.

I designed the piece based on the parts available from my hardware store:
The table legs are table legs because they come with hanger screws installed in one end. If lengths of wood were used, eight additional hanger screws would be needed.

Construction was mostly straightforward, and I will describe it the way it should be one, instead of the way I actually did it, which was slightly different:
The end product was even better than I had designed it to be, because the space beneath the lower shelf turned out serendipitously to be exactly high enough for my kitchen trash and recycling bins. Also, I was happy that I didn't make any major mistakes during construction.
Posted by Anonymous at 11:13 PM