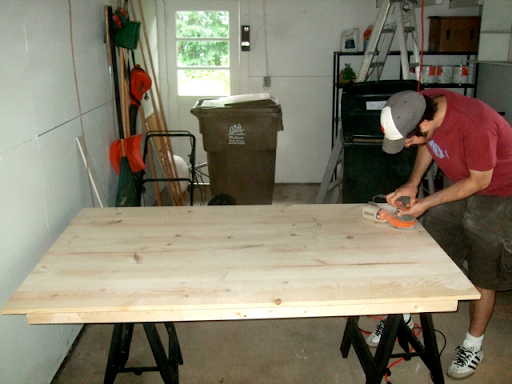 For part of the renovation of my new house I built a dining table. This was my first solo attempt at large furniture. It turned out okay, but there are significant errors in the implementation.

Some things I did right

Some things I could have done better
The thickly applied polyeurathane was a serious mistake which caused many problems
The overall design is simple but attractive. The half-dozen planks forming the deck are screwed to a piece of plywood. Beneath the plywood is a bifurcated rectangular box made of two-by-fours. By bifurcated, I mean the outer rectangle is bisected side-to-side with a cross-beam. Corners are screwed and glued. The deck is screwed all along the bifurcated rectangle. Finally, pre-made table legs are screwed into the inside corners of the rectangle. Don't forget the felt pads under the legs!
Posted by Anonymous at 12:06 AM