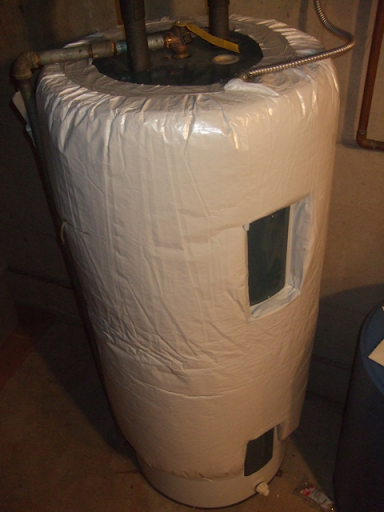 In preparation for winter I installed insulation on most of my hot water pipes and wrapped my water heater in an insulating blanket. My house has both copper and steel pipes, in three different sizes, with many right angles and T connections, so it took a few trips to the hardware store before I had all the pipe insulation bits that I needed. I chose the kind of pipe insulation pre-cut lengthwise, with sticky to close the seam, because it was easy to install. And indeed it was easy to install.
I have a large, 65-gallon electric hot water heater. I bought a large-size water heater blanket, which is what they call the purpose-sized rectangular plastic-backed fiber-glass insulation. The packaging suggested that a typical installation includes cutting the blanket but it was the perfect size for mine.

Posted by Anonymous at 9:22 PM