Here are the plans and instructions for the bed I built with my girlfriend Ashleigh and her father, Bob Arledge. Ashleigh and I love our California King size foam mattress, but we did not have a bed to go with it. Because of the rare large size, a new bed from a store would have been very expensive, perhaps a thousand dollars. Even though the corners on this bed are more rough than on a store-bought bed, 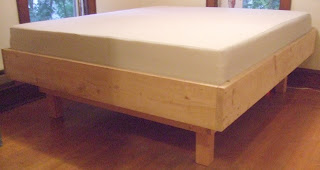 and the wood isn't finished, the bed we built is far, far, far more sturdy than a store-bought bed, disassembles into three smaller parts for easier moves, and only cost $150 in wood and hardware, plus a day of labor.

Bob, who is a professional engineer, drew up the plans with input from Ashleigh and I. As an engineer, he made a bed that would easily hold thousands and thousands of pounds. He brought his own grid paper and laid it all out with an itemized list of parts. We bought the wood at Home Depot, which conveniently cuts your wood for you, to specification, for free. That's an essential service right there, because I have none of the inclination, the tools, nor the space to cut lumber.

A California King mattress is exactly six feet by seven feet in size, and our mattress is one foot tall. The parts list was:The bed structure is broken down into two levels: a base, and a platform; and the platform is divided into two symmetrical halves. We started with the base, which took parts C, D, H and I. We took great caution to keep all our corners square and the legs the same height. We glued and anchored each junction with two 3 1/2" screws. The four bed legs are designed to stick up above the base by a few inches, so that the combined two halves of the platform snugly fit around those four legs, which is the only way the base and platform are connected (they aren't screwed together). I put the felt feet on the bottom of the bed legs and we moved the base out of the construction area into position in the bedroom.

We then commenced construction of the two halves of the platform. As we built them, we withheld the boards labeled G in the drawing because we wanted to place both platform-halves onto the base, screw them to one another, and then install boards G to keep the whole thing firmly held by friction and gravity. We also did not install the boards labeled B in the drawing, because those are the head and foot boards, which span the two halves of the platform, so they need to be screwed in after the platform is in place. Even though we put in two screws to hold together the two halves, 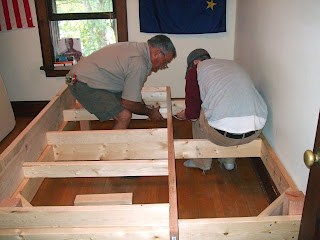 and even though the head and foot boards are screwed into both halves, the general idea is that the bed could be disassembled easily when it needs to be moved, by removing those screws. That would be ten screws altogether for this bed.

Where board A meets board F, the screw head is visible on the outside of the bed, so we drilled all those holes about a quarter inch deep with the countersink drill. That way, the head of the screw is down in a little hole, and we can put the button plugs into the holes, to make it look a little more finished.

When the two halves of the platform were complete we placed them onto the base so that the the feet stuck up into the bottom of the platform. Three of the F boards rested on top of the D boards. First we put one screw through each end of the mated E boards, just to keep them together; then we attached the B boards (head and foot boards), by screwing them into the A boards (the sideboards) from the end. We had considered running a line of 2 1/2" screws along the B boards into the F and E boards, which would have provided another layer of structural integrity, but decided it wasn't even worth the effort, because the bed was already plenty solid. Leaving them out would save time drilling countersink holes, and would also reduce the number of screws required to separate the platform halves for deconstruction.

We measured and centered the platform on the base, then wedged the G boards into place between two F boards and screwed them in; the space was tight, as you can see it would be in the drawing, so two of the screws on each G board went in at angles from above and below. The G and F boards were all attached to one another in order to distribute weight from people sitting directly on the edge or corner, along the A and B boards. You can see how weight at the AB corner would be distributed to a few different joints and boards. Then we laid in the two pieces of plywood, which actually we had to wedge in. If anyone were to duplicate this bed, they would be wise to get their plywood a fraction of an inch smaller, since it doesn't need to fit tightly. Having marked where the F boards were, down under the plywood, we used 2 1/2" screws to attach the plywood to the base. We used a lot of screws because the plywood is important for straightening out any warps in the boards, and keeps the bed from torquing under shifting weight.

That was it. The bed was complete. Both of us grown men could walk around on the bed, on the plywood platform, without even hearing it creak. Certainly it is stronger than the floor which supports it. What we really like about this bed is that it is tall and sturdy. As a tall fellow myself, I am often frustrated by short or petite furniture, and it is nice to roll out of bed in the morning into a standing position. (We also recently raised our couch, which was a particularly low couch, up by six inches, so that now it is a particularly high couch, and I love that.) This bed doesn't wiggle or settle or creak at all due to the combination of the excessively solid construction and the foam mattress.
Posted by Anonymous at 8:47 PM

Labels: bed, blueprints, california king bed, californiaking, diy, do it yourself, how to, instructions, plan