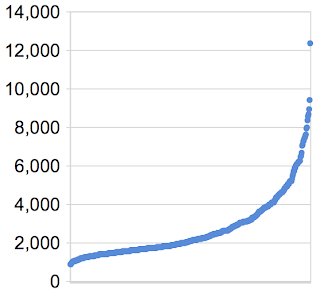 Like I did with my first genetic algorithm, I ran the most recent one 500 times overnite. You can see the graph here showing the number of generations it took to reach the optimal state. This algorithm has a bigger tail than the first one, as you can see: although the average was 2693, the median was 2095, and the longest runtime was 12354, six times longer than the median.

So I would characterize this algorithm as providing a weaker mechanism of natural selection, thus having a longer tail. That's my best guess, anyway.
Posted by Anonymous at 12:21 PM