Way, way, way back in 2010, I put in a pre-order for a Truly Ergonomic Keyboard. The company promised a keyboard shortly after I ordered it, but repeated delays carried the actual first production run to this fall, and I finally received my keyboard only this week. I love it. It is the keyboard I have always wanted, and exactly the keyboard they promised to deliver.

Previously, I owned a FingerWorks Touchstream LP keyboard. That was a very different kind of input device, combining typing with dozens of multi-touch gestures on dual touch-pads which completely change the interaction pattern with a desktop computer. 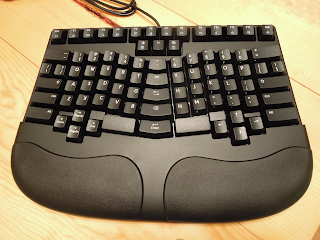 The gestures were the key feature of the Touchstream, but the thing which I loved the most was the columnar key layout: each column of keys, which are all hit by the same finger, were laid out in straight columns, whereas typical keyboards stagger the columns. The result is that your wrists don't have to twitch back and forth while typing, and thus experience less exposure to repetitive stress movements. Yet, even though the Touchstream had a columnar layout, the lack of physical keys, their feedback and their sound, made it otherwise somewhat difficult to type quickly.
Ever since then, a decade ago, I have wondered why nobody ever made a split-key keyboard with columnar layouts. Although it can be difficult to learn completely new layouts or completely new ways of entering text to a computer, the switch to a columnar layout is a very minor adjustment, easy to make, with immediate and substantial benefits. 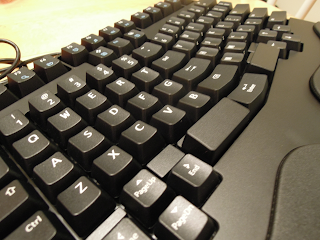 Finally, somebody has made that keyboard: the Truly Ergonomic. Not only does it have a columnar layout, they also changed the position of some of the rest of the keys: they moved Enter, backward Delete, Tab, and forward Delete to the center of the keyboard. This is because in a typical keyboard, all those special keys are hit by our pinky fingers, the weakest and least dextrous of all the digits. On the Truly Ergonomic, those keys are hit by the thumb or forefinger, which are the strongest and most dextrous of the digits.
They didn't go too far, though: the weak pinky fingers are still responsible for Shift, Ctrl/Command, Alt, and many assorted symbols. The only character key which actually moved from one side of the keyboard to the other is the question-mark key. The apostrophe moved down to the bottom row. All in all, they changed as little as possible to meet the design goals of the keyboard,
and I think they did a good job with that. 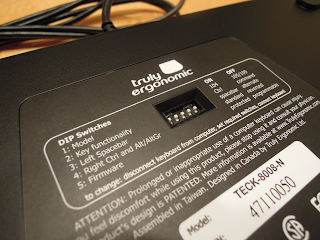 The quality of the keyboard is first-rate. They promised some sort of "famous Cherry MX" clacky-style keyswitches, and they are indeed pretty good keyswitches. It takes a low amount of pressure to depress them, yet they respond with a satisfying percussive clack sound and bounce up immediately under my fingertips.
Is this keyboard perfect? Not quite. There is one other thing I always wondered: why isn't there a Symbol Shift key on our keyboards? That key would turn on all the special symbols on a keyboard, such as numbers, parentheses, brackets, braces, slashes, bars, dashes, and all the symbols currently found on the number keys. Altogether, the count of those symbols is probably close to the number of letters-plus-punctuation. Imagine a Symbol Shift key to turn all those on, so that each key on the keyboard stood for a lower-case letter, an upper-case letter, and a symbol. As a bonus side-effect, the Symbol Shift key would turn the right side of the keyboard effectively into a numeric keypad, thus eliminating the need for one. Perhaps this mechanism could be a generalization of the Num Lock feature, and all we would need to do is rename that to Symbol Lock, and add a Symbol Shift key. This would also be a huge boon for programmers, who use symbols when coding, and must strain to reach the symbol keys on traditional keyboards. 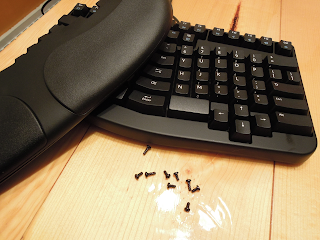 Posted by Nicholas Keene at 5:33 PM