My custom media cabinet is built from an old cedar chest. Inside I mounted two power strips, one on each end of the bottom of the cabinet, with cords running out of a circular hole cut in the back. These twin power strips provide 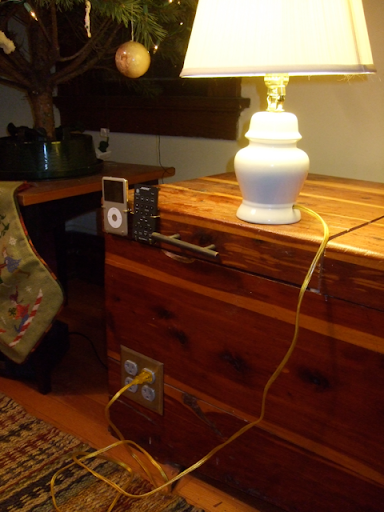 plenty of grounded, surge-protected outlets to power the numerous electronic devices inside. The two cords, however, take up the two sockets available on the wall, leaving none for incidental electrical needs such as plugging in a vacuum cleaner, or charging a cell phone. Furthermore, the rectangular corpus of the cabinet physically blocks access to the wall outlet, even if a multiplier plug is used (which, incidentally in this case, one is).

Thus, to provide power to external devices, I have long planned to install electrical outlets into the front face of the media cabinet, and did so over the last two days. Because I strongly feel that two-plug outlets are uselessly anachronistic, due to the proliferation of plug-in devices, I installed a dual-socket, four-outlet plug. Because this would be mounted in the media cabinet, the cord which fed the outlets had to have a male electrical plug on the end. 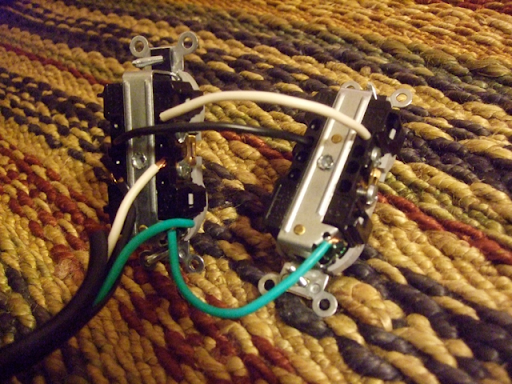 The picture here shows how I wired my sockets.

The difficult part was cutting the hole into the cabinet. For this I used the pathetic and inadequate woodworking tools at my disposal.

In this endeavor, the most failure occurred during the cutting of the hole. I nearly destroyed my brittle cabinet, which partially crumbled under the slightest cuts. Also, the circular Dremel saw was too small to cut all the way through the three-quarter-inch hard wood of the cabinet. The initial trouble cutting this hole made the task stretch from one evening to two. Eventually the rotating sandpaper tool widened the hole to just the right dimensions, and the jagged wood saw was very handy for squaring out the corners, so that the electrical box would fit in. It was very important that the fit be tight, because believe it or not the electrical box was an important structural element to that corner of the box, which is the most brittle.

Posted by Anonymous at 8:57 PM