Last night I went to a little party with some friends where the activity was to carve pumpkins. Altogether the group might have done a dozen 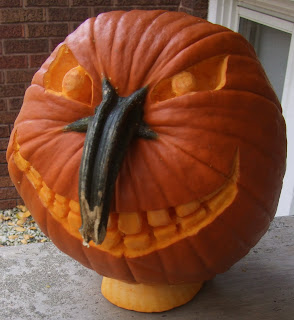 jack-o-lanterns, ranging from the traditional (two eyes, nose, jagged mouth) to the creative (outlines of turkeys and camels). At least one participant engaged in the holiday tradition for the first time.

As for me, I searched the internet for inspiration and found some really amazing pumpkins. I found one design that I thought was very cool and within the range of my ability. While the rest of the group was busy hollowing out their gourds and cutting through the rind with serrated knives, I set out cutting the edges of the eyes and mouth, then scraping the features of the eyeballs and teeth using a kitchen knife and a bottle cap.

I made sure to copy several features of the jack-o-lantern which was my inspiration. I liked how the mouth on the original was wide, with sharp curls at the edges. I also really liked the teeth on the original: each one was distinctly carved, curved, angled. Both the eyes and the teeth in the mouth used the natural wrinkles of the pumpkin, giving the whole thing an integrated, organic effect that I liked a lot. I didn't do my eyes the same way because I wanted to put a candle inside mine and have the light glow through the eye sockets and between the teeth.
Posted by Anonymous at 2:14 PM