When I lived in New Hampshire, I was driving down the road in my big white van one day and came across a discarded cabinet. Needing furniture, and being bored, I took it home with me, and discovered it to be a hi-fi cabinet, the kind your parents or grandparents used to listen to music a long, long time ago. That one still partially worked, with one (of four) bad speakers. I gave it some TLC, replaced the speaker, rewired the internals, revised the way the top opened, and installed an old iMac inside of it. That was a cool project, which I had to abandon when I moved away shortly thereafter.

When I lived in Juneau, I came across a discarded chest of drawers, like the kind you might keep your socks in. This one was short, with only two drawers. I made a second stab at the media cabinet concept, building in an old laptop as a CPU, an EyeTV to capture cable TV 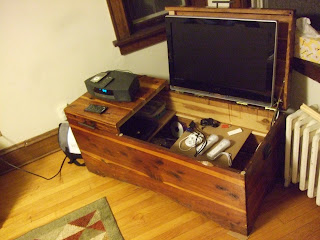 input, a large external hard drive, and wifi. I also wired USB and audio ports to the outside of the cabinet, and had a medium-sized LCD HDTV sitting on top. That was very cool, but I had to abandon it when I left Juneau.

Now I live in Madison, and I have built a cabinet one step above my previous attempts. For $25 I purchased an old, somewhat battered cedar chest at a garage sale. In a stroke of genius, I realized that my medium-sized LCD HDTV would fit just right if mounted on the inside of the lid of the cedar chest. I cut the lid into two parts, of approximately one third and two thirds, installed new hinges, including support hinges to keep the lid parts upright; I reinforced the structural integrity of the box using brackets and glue; and I added a pair of runners on the inside of the cabinet, with movable platforms riding on them, sliding back and forth. I bought a mount for the TV, designed to attach to a wall, but instead I mounted it to the lid of the cabinet. 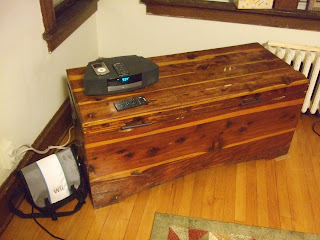 So now when I want to watch TV I simply open the lid of the cabinet and turn on the television. When I am done, and don't want my TV to ruin the chi flowing around my living room, I simply close the lid, and the TV disappears down into the cabinet.

The sliding platforms inside are a convenient place to tech devices I like to keep handy: remote controls, Wiimotes, thumb drives, USB cables, cell phone chargers, batteries, etc. When I want to get down into the bottom of the chest, I slide the platform out of the way and I can access things on the bottom of the chest: 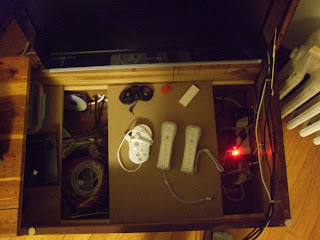 the dual surge protectors which provide 12 plugs on the inside of the chest, the wifi routers, the internal wiring for the box, or my Wii.

In the future my plan is to scrap together a PC computer running Mythbuntu, so that the chest will have an internal media center PC, providing TiVo-like capabilities such as recording live television, streaming video from the internet, and playing and ripping DVDs. That Mythbuntu box will also function as a living room server, providing large-capacity file backup space for the rest of the computers in my life, webserver, fileserver, music server, etc.

The back of the cabinet has a two-inch-diameter hole drilled in it (using a doorknob drillbit) to run the coax cable and the power cords for the surge protectors. On top of the smaller part of the lid sits a Bose Wave radio, providing good sound when watching TV, movies, or when listening to music. The bracket which supports the TV is attached to the cabinet lid using two sturdy bolts, with washers and nuts that stick out the top of the lid. That is unfortunate but necessary. Also unfortunate is that the cabinet is not sturdy enough to function as a bench for people to sit on when it is closed.
Posted by Anonymous at 10:47 AM